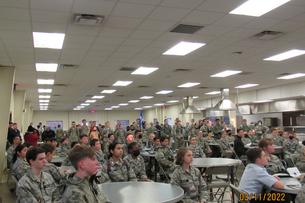 On March 11 2022, cadet and senior staff gathered at Fort Wolters, Texas, to prepare for the
upcoming Airman Leadership School. This event had been long in the works; staff members had
already put many hours toward making this ALS run smoothly. While operations cadre set up for
student in-processing, support worked with their departments to communicate their individual
assignments for the weekend. Executive staff then briefed all cadre on the general expectations
for conduct and excellence. At 5:00PM, all was in order and the cadre were ready to roll!

Students from all over the state started arriving at this long-awaited event while cadre guided
them through the beginning of their weekend journey—in-processing. This high-intensity
experience is used to set the tone for the rest of ALS. Cadets kept their professionalism in check
while handing in their forms and getting checked for contraband. Later in the day, cadets were
introduced to their executive staff, including the cadet commander, Cadet Col. Skylar Henry.
Cadets then gathered with their flight pairs for the upcoming safety briefing. The cadet oath
was taught in their first class, led by Cadet Maj. Esther A. Treibs.

After a long eventful day, cadets prepared for closing formation, after which they headed to
their bunks. There they rested up for the action-packed day ahead. 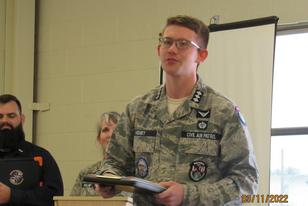 Students learning about the cadet oath 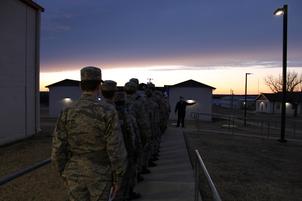 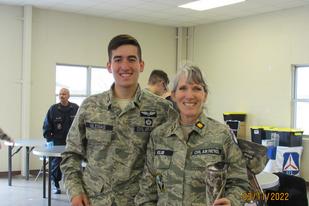 “TO THE TOP”
By Cadet Chief Master Sgt. Abigail Shepson

The idea of NCOS sprang from necessity. While new cadet NCOs often get plenty of classes instructing them about how to be a good leader, there is often a gap in their education regarding direct experience. NCOS fills this gap. It teaches cadets not only through interactive classes, but also through rigorous training exercises. The students learn through experience – they’re put into various leadership positions, required to keep their team on schedule, and expected to maintain high standards of excellence. The group is led by Cadet Chief Master Sgt. Debord and Cadet Lt. Col. Shramko, both of whom are experienced in different areas of leadership. Discipline and respect are heavily emphasized at all times.

One of the best ways that cadet NCOs gain experience from this event is through full immersion in student leadership positions. The students are rotated between various positions such as flight sergeant, element leader, and guidon bearer positions for example, and are expected to take full charge of their situations. As a flight sergeant or element leader, cadets are expected to keep themselves and those under them on task and on schedule. Other positions require different sets of skills. Position rotation ensures that everyone gets experience, even with limited time.

Overall, NCOS has been undoubtedly successful. The fast-paced environment is effective to teach the cadets, but there’s also time for the cadets to get to know each other and make lifelong friends. When Lt. Col Shramko was asked about what students should get out of NCOS, he stated: “Essentially, NCOS is a leadership laboratory. It especially focuses on drill knowledge and NCO roles and responsibilities. NCOA (Noncommissioned Officer Academy) is more classroom-oriented and gives cadets leadership concepts needed as a Noncommissioned Officer. NCOS puts those concepts into practice through hands-on experience. We’re working hard every day to rebound from the recent pandemic.” NCOS is an amazing opportunity for cadet NCOs to learn and grow; there’s nothing else quite like it, and the experience is unforgettable.